What you need to know about Medina Medina, also transliterated as Madīnah, is a city in the Hejaz region of Saudi Arabia that is also the capital of the Al Madinah Region. The city contains al-Masjid an-Nabawi (“the Prophet’s Mosque”), which is the burial place of the Islamic prophet Muhammad, and is the second-holiest city in Islam after Mecca.

Medina was Muhammad’s destination after his Hijrah from Mecca, and became the capital of a rapidly increasing Muslim Empire, first under Muhammad’s leadership, and then under the first four Rashidun caliphs, Abu Bakr, Umar, Uthman, and Ali. It served as the power base of Islam in its first century where the early Muslim community developed. Medina is home to the three oldest mosques, namely the Quba Mosque, al-Masjid an-Nabawi, and Masjid al-Qiblatayn (“the mosque of the two qiblas”). Muslims believe that the chronologically final surahs of the Quran were revealed to Muhammad in Medina, and are called Medinan surahs in contrast to the earlier Meccan surahs.

Similar to Mecca, non-Muslims are forbidden from entering the sacred core of Medina (but not the entire city) or the city centre by the national government.

Medina’s importance as a religious site derives from the presence of al-Masjid an-Nabawi. The mosque was expanded by the Umayyad Caliph Al-Walid I. Mount Uhud is a mountain north of Medina which was the site of the second battle between Muslim and Meccan forces.

The first mosque built during Muhammad’s time is also located in Medina and is known as the Quba Mosque. It was destroyed by lightning, probably about 850 CE, and the graves were almost forgotten. In 892, the place was cleared up, the graves located and a fine mosque built, which was destroyed by fire in 1257 CE and almost immediately rebuilt. It was restored by Qaitbay, the Egyptian ruler, in 1487.

Masjid al-Qiblatain is another mosque also historically important to Muslims. It is where the command was sent to Muhammad to change the direction of prayer (qibla) from Jerusalem to Mecca according to a Hadith.

Like Mecca, the city of Medina only permits Muslims to enter, although the haram (area closed to non-Muslims) of Medina is much smaller than that of Mecca, with the result that many facilities on the outskirts of Medina are open to non-Muslims, whereas in Mecca the area closed to non-Muslims extends well beyond the limits of the built-up area. Both cities’ numerous mosques are the destination for large numbers of Muslims on their Umrah (second pilgrimage after Hajj). Hundreds of thousands of Muslims come to Medina annually while performing pilgrimage Hajj. Al-Baqi’ is a significant cemetery in Medina where several family members of Muhammad, caliphs and scholars are buried.

Islamic scriptures emphasise the sacredness of Medina. Medina is mentioned several times as being sacred in the Quran, for example ayah; 9:101, 9:129, 59:9, and ayah 63:7. Medinan suras are typically longer than their Mecca counterparts. There is also a book within the hadith of Bukhari titled ‘virtues of Medina’.

Narrated Anas: The Prophet said, “Medina is a sanctuary from that place to that. Its trees should not be cut and no heresy should be innovated nor any sin should be committed in it, and whoever innovates in it an heresy or commits sins (bad deeds), then he will incur the curse of Allah, the angels, and all the people.”

The Saudi riyal (Arabic: ريال‎‎ riyāl); is the currency of Saudi Arabia. It is abbreviated as ر.س or SR(Saudi riyal). It is subdivided into 100 halalas (Arabic: هللة‎‎ Halalah). 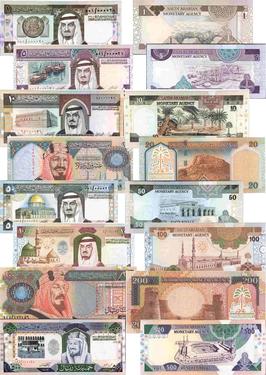 The soil surrounding Medina consists of mostly basalt, while the hills, especially noticeable to the south of the city, are volcanic ash which dates to the first geological period of the Paleozoic Era.

Al Madinah Al Munawarah is located at Eastern Part of Al Hijaz Region in the Kingdom of Saudi Arabia on longitude (39 36 6) and Latitude (24 28 6).

Madinah is located in the north-western part of the Kingdom, to the east of the Red Sea, which lies only 250 kilometres (160 miles) away from it. It is surrounded by a number of mountains: Al-Hujaj, or Pilgrims’ Mountain to the West, Salaa to the north-west, Al-E’er or Caravan Mountain to the south and Uhad to the north Madinah is situated on a flat mountain plateau at the junction of the three valleys of Al-Aql, Al-Aqiq, and Al-Himdh. For this reason, there are large green areas amidst a dry mountainous region. The city is 620 metres (2,030 feet) above sea level. Its western and southwestern parts have many volcanic rocks. Madinah lies at the meeting-point of longitude 39 36′ east and latitude 24 28′ north. It covers an area of about 50 square kilometres (19 square miles).

Al Madinah Al Munawwarah is a desert oasis surrounded with mountains and stony areas from all sides. It was mentioned in several references and sources. It was known as Yatrib in Writings of ancient Maeniand, this is obvious evidence that the population structure of this desert oasis is a combination of north Arabs and South Arabs, who settled there and built their civilisation during the thousand years before Christ.

Medina has a hot desert climate (Köppen climate classification BWh). Summers are extremely hot with daytime temperatures averaging about 43 °C (109 °F) with nights about 29 °C (84 °F). Temperatures above 45 °C (113 °F) are not unusual between June and September. Winters are milder, with temperatures from 12 °C (54 °F) at night to 25 °C (77 °F) in the day. There is very little rainfall, which falls almost entirely between November and May.

As with most cities in Saudi Arabia, Islam is the religion adhered by the majority of the population of Medina. Sunnis of different schools (Hanafi, Maliki, Shafi’i and Hanbali) constitute the majority while there is a significant Shia minority in and around Medina, such as the Nakhawila. Outside the city centre (reserved for Muslims only), there are significant numbers of non-Muslim migrant workers and expats.

The Medina Knowledge Economic City project, a city focused on knowledge-based industries, has been planned and is expected to boost development and increase the number of jobs in Medina.

The city is served by the Prince Mohammad Bin Abdulaziz Airport which opened in 1974. It handles on average 20–25 flights a day, although this number triples during the Hajj season and school holidays.

With the increasing number of pilgrim visiting each year, many hotels are being constructed.

Major roads that connect city of medina to other parts of the country are,